Each year in the United States, at least 2 million people become infected with bacteria that are resistant to antibiotics and at least 23,000 people die as a direct result of these infections. Many more people die from other conditions that were complicated by an antibiotic-resistant infection.

On September 18, 2014, the White House announced an Executive Order stating that the Federal Government will work domestically and internationally to detect, prevent, and control illness and death related to antibiotic-resistant infections by implementing measures that reduce the emergence and spread of antibiotic-resistant bacteria and help ensure the continued availability of effective therapeutics for the treatment of bacterial infections.

Antibiotics only treat bacterial infections. Viral illnesses cannot be treated with antibiotics. When an antibiotic is not prescribed, ask your healthcare professional for tips on how to relieve symptoms and feel better. 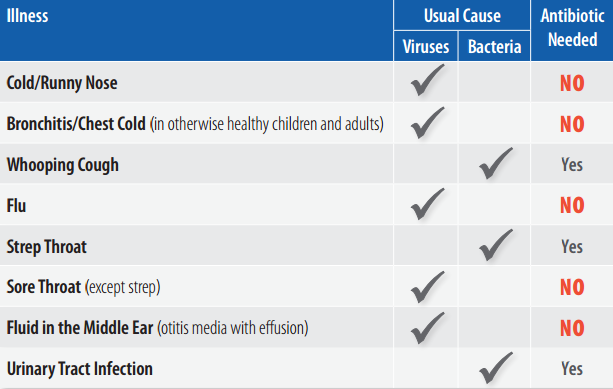